How To Hit Your Kickstarter Goal: Tips and Tricks

On July 5, Ungalli, a sustainable clothing company from Thunder Bay, ON (and an amazing Marigold client) hit their Kickstarter goal!

Together with co-founders Hailey and Bree Hollinsworth, we helped raise $60,000 over 35 days to fund the production of their latest product – stylish and sustainable Joggers.

There are tons of tips of out there about running a successful Kickstarter campaign – in fact, Kickstarter has some great Creator FAQs and tips of their own – but these are some outside-the-box tips from the field

It Takes a Village
Ungalli’s co-founders worked countless hours to ensure their Kickstarter was a success.

Then there were the countless influencers, fans, friends and family who helped (a lot!) along the way. (P.S. Thank you!

Pre plan
A Kickstarter definitely doesn’t start on its launch day. Meet early, and often, to update your team, ensure you’re not overlapping efforts, and confirm that nothing is being missed – if you wait until launch, you’ll be up the Kickstarter creek without a paddle.

Planning for Ungalli’s Kickstarter began in earnest in early April in advance of a May 30 launch, but the idea and basic prep started long before then.

Develop a pre-campaign strategy with three key pillars in mind: community building, audience engagement and contact acquisition. An engagement tool is key at this stage to generate interest and info for influencers and fans you’ll want to activate once the campaign is live.

Here’s what we did: Hailey and Bree knew their fans wanted Joggers – but they didn’t know what they wanted them to look like. Ungalli’s pre-planning tool naturally became a poll about the colour, fabric and style of said pants.

Users responded to for a chance to help design the Joggers, and to win a small monetary prize ($25 gift card). In exchange, we received their contact information so we could re-target the audience who responded to the poll through paid advertisements and newsletter promotions once the Kickstarter launched.

This helped drive interest in the Joggers – and grew Ungalli’s email list 71% in less than two weeks – 71% more people to market the new product to!

It was also a great way for Ungalli to drive deeper relationships with their fans.

“Our favourite part about Kickstarter was being able to connect with our customers on a new level. The Joggers were only going to happen if they wanted them, and luckily for us they did! It was really in their hands though,” -Hailey, Ungalli Co-Founder

Host a launch party
On June 1, Marigold travelled to Thunder Bay, ON to co-host a Kickstarter launch party with Hailey and Bree, plus an army of their fabulous family and friends.

For Ungalli’s, and many Kickstarter campaigns, a launch party is a key tool to drive pledges and ultimate success. It helps generate interest, activate the local audience and gauge a temperature read on interest in the campaign overall.

Pre-planning for the party included engaging local media and influencers, sending invitations to personal friends of Ungalli, and targeting social media ad buys to their devoted Thunder Bay fan base. This ensured high attendance and a healthy number of pledges. It didn’t hurt that we incentivized it – free snacks and giveaways, anyone? 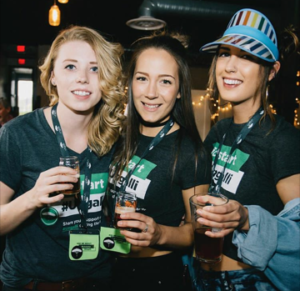 We raised over $15,000 – more than 25% of Ungalli’s $60,000 goal in one day – which helped shoot them to #6 and then #5 in Apparel on Kickstarter. That got more eyes on the Jogger prize – a feature on Kickstarter means a campaign is more likely to be successful. If you can get on their email list (which, confession: we didn’t – let us know if you figure out how!) your campaign, based on statistics, will hit 428% of its goal.

Remember; don’t hesitate to hustle. When understaffed media outlets didn’t respond to initial press releases, we followed up, repeatedly…in the friendliest way possible, of course. When you genuinely believe in something and want it to succeed, it shows, and your enthusiasm will inspire others.

Plus, once one influential media outlet starts talking about something, others will follow. After promoting the earned coverage and doing some additional media outreach, eco-fashion and lifestyle blogs featured Ungalli and helped drive the success of the campaign.

Engage with key influencers
Research suggests that younger audiences are less trusting of traditional media and advertising and prefer to receive marketing messages authentically – that’s why we reached out to influential eco-bloggers, stylists and social powerhouses to help boost Ungalli’s campaign. 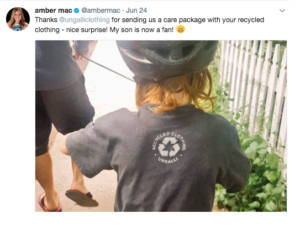 Although Twitter is sometimes undervalued, it was a key way to engage influencers for Ungalli’s Kickstarter campaign.

Have a solid social media strategy
Pre-planning for a successful Kickstarter campaign includes seeding social media weeks from launch with engaging content that will entice your audience to see what’s coming.

Paid Facebook ads were key in targeting the poll messaging to both Ungalli’s dedicated Thunder Bay audience, and to a new national one.

After we promoted the Joggers poll, we followed up with the winning pant style on Kickstarter launch day – what better time to buy!

But there’s more to it than that. We’ve said it before, and we’ll say it again here: Live Content Delivers. The strategy for Ungalli’s Kickstarter was a mix of Instagram Live, Facebook Live, and the brand new Kickstarter Live. Launched November 2016, it’s still in its early stages and not the easiest to use. Case in point: right now you can only go live on desktop, not mobile or tablet. But…scheduling a Kickstarter Live at least 24 hours in advance (ideally 48) means you’ll be featured on their Explore page both before and after the event. Extra exposure? For free? We’ll take it!

Keep the content coming
From polls to blogs to newsletters and back, content was key to Ungalli’s successful Kickstarter campaign.

They became a way to promote Hailey and Bree’s smart daily deals, give backers status reports, and offer thanks.

One key takeaway is to keep your content focused on the product. We noticed a decided uptick in pledges once we began fleshing out the awesome features of Ungalli’s Joggers in our blog posts and newsletters.

Don’t forget to use Updates on Kickstarter. They’re key in engaging your audience – everyone whose already pledged is notified once you make one – prompting them to share your content, or buy more packages!

Don’t panic aka be prepared for the long game
On or about June 15, we confess we started to worry a bit. Pledges flooded in in the first two weeks of the campaign but had started to slow.

Content and social posts seemed to be resonating: what could be going on?

“The worst part was how slow the 35 days went by. It was really stressful and on our minds all the time. It would have been a pretty big blow for us if we didn’t get to grow the Ungalli brand, and spread the word about the changes that need to happen in our industry,” -Hailey, Ungalli Co-Founder

Turns out, some people are just late to the party. With continued effort and some additional marketing spend, a second wave of pledges came and Ungalli hit their goal.

“Honestly some of the people who supported us in a really big way, I would have never expected to have done so! People we went to high school with or haven’t talked to in a long time; we saw so much generosity!” -Hailey, Ungalli Co-Founder

Have you considered launching a Kickstarter for your unique project? Marigold can help – find out how!